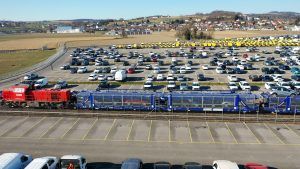 ÖBB Rail Cargo Group (RCG) has conducted a freight pilot train from Spain to Austria on the route between Barcelona, and St. Valentin/Schwertberg in Upper Austria. The train was organised for the transport logistics specialist Hödlmayr Rail Logistics GmbH. The project is part of the regular, sustainable TransFER connections which now paves the way for green transport services to Barcelona and back.

The second test train will be announced in the next few weeks, allowing planning for regular operation to finally begin. The current concept plans for one weekly round trip between Austria and Spain with prospects involving three or four round trips per week.

The freight pilot train has been implemented together with Hödlmayr Rail Logistics GmbH and Fret SNCF and it is expected to become a regular transport service. Together with its sister company Captrain Espana, the French railway company Fret SNCF operates as the carrier for the section between Saarbrücken and Barcelona. Thanks to the brand-new Euro 6000 locomotives acquired by Captrain Espagna, able to run both in Spain and in France, the trains are routed via the line standard-gauge Perpignan – Barcelona railway line and avoid any axles change operations in Cerbère, where the line at UIC gauge connects to the line at Spanish gauge. Transport is faster and seamless.

“This first test train from Spain to Austria and back demonstrates the capabilities of our railway logistics solutions here at the ÖBB Rail Cargo Group. I would like to personally thank our partners, Fret SNCF/Rail Logistics Europe and Hödlmayr International, for their competent, professional work on this project,” RCG Spokesman of the Board, Clemens Först said.

The train transported new vehicles which underwent eco-friendly transport by rail from Spain to Austria. Shifting goods transport from road to rail is crucial in allowing us to achieve climate targets in Austria and in Europe. Transporting a tonne of freight by rail is 30 times better for the environment than transporting it by truck.