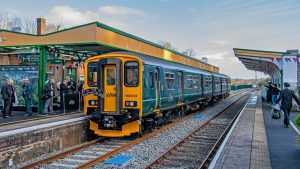 Regular train services returned on the Dartmoor Line between Exeter and Okehampton on November 20, after nearly 50 years of closure. Two-hourly seven–days–a–week services will be operated by Great Western Railway (GWR) with journey times between Okehampton and Exeter, including stopping at Crediton, taking approximately 40 minutes.

The Dartmoor Line, which received GBP 40.5 million (EUR 48.3 million) in March is the first former line to reopen under the Government’s Restoring Your Railway programme.

Benefitting from the application of Rail Project SPEED approaches, this 22.5 km stretch of mothballed former freight railway has been transformed in nine months and completed more than GBP 10 million (EUR 11.9 million) under budget.

The project included new track laying for 17.7 km the installation of 24,000 concrete sleepers and 29,000 tonnes of ballast in a record-breaking 20-day period. Repairs have also been made to 21 structures along the route including four bridges.

Other infrastructure work has included level crossing improvements and the installation of railway communications equipment.

Vegetation clearance, earth and drainage works and fencing have also been completed and further infrastructure work will continue to take place to increase the line speed to enable an hourly service in 2022.

Work has been also performed at Okehampton station which covered new information screens, a Help Point, smartcard validation points, ticket vending machines, and a waiting room. More work will be carried out over the winter, including further work on the station buildings to enable the restoration of the café and other facilities.

The route connects Exeter St Davids, Crediton and Okehampton, providing a launchpad for visitors to explore Dartmoor and regional links for local commuters. Around half of services, including at peak times, will also carry on to Exeter Central. Passengers travelling between Crediton and Exeter will also benefit from an increase in service frequency.

The reopening of regular train services on the route will boost local businesses, the tourism sector, and provide greater access to education and work for thousands of people who live locally.