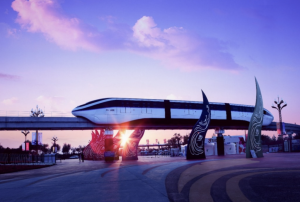 BYD SkyRail signed the contract to supply trains and integrated solutions for Line 17/Gold Sao Paulo monorail project. In February, BYD was named the winner of the contract with a value of USD 171.3 million.

The recently signed contract marks BYD’s second major project in Brazil following the company’s SkyRail project in the city of Salvador, a contract that was awarded in January.

The first phase of the straddle-type monorail system will have a total length of 17.7 km running from Sao Paulo’s Congonhas Airport to the city centre. It will provide transport connections to vital business districts, the University of Sao Paulo and densely populated areas in the city’s east. The Sao Paulo monorail will have interchange stations providing transport links with Line 1 (Blue), Line 4 (Yellow), Line 5 (Lilac), and Line 9 (Emerald).

The Gold Line will have a daily ridership of 250,000 passengers and the interval between departures can be as rapid as 80 seconds, which will need high requirements for the project’s technology and operations system.

The completion of monorail link is expected to significantly alleviate the pressure on road traffic between the Sao Paulo and Congonhas Airport, which is one of the three major commercial airports in the city.

In January, Sao Paulo Metro signed a USD 84.8 million contract with Constran for the resumption of civil works on the Gold Line involving 8 stations.

For the development of the Line 17/Gold, in 2019, the Development Bank of Latin America and the Sao Paulo authorities have signed a USD 296 million loan agreement covering the construction works, management and operating systems and the acquisition of the needed rolling stock.