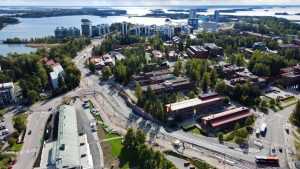 The track laying on the Espoo section of the Jokeri Light Rail project has been completed between Keilaniemi and Vermo, allowing the double track to run from Kuusisaarentie in Keilaniemi district situated in the south-eastern part of Espoo, to the border of Helsinki through Leppävaara, in the eastern outskirts of Espoo.

The tracks connection took place when a movement machine was installed at the north end of Impilahdensilta bridge crossing Turunväylä. The Espoo section of the rail is the only missing LRT section in Keilaniemi, where the terminus of the Jokeri Light Rail is being built at the moment.

Most of the Jokeri Light Rail project in Espoo will be completed by the end of this year. The construction of the terminus in Keilaniemi and some of the work in Otaniementie will continue in 2022. Installation of the overhead cables and technical systems, such as camera surveillance, will be done after the excavation and railway construction work has been completed.

The construction of this section has been rapid, and the city has also used the opportunity to improve other urban infrastructure. “We invested heavily in renewing other infrastructure elements in connection with the construction of the Jokeri LRT, such as water maintenance networks and pedestrian and cycling routes. This was done to ensure that there will be no need for the city to start major infrastructure improvement projects on these streets in the near future, avoiding further disturbance to local residents,” the project manager of the City of Espoo, Mira Saarentaus, said.

The total length of the Jokeri Light Rail transit is 25 km of which 9 km in Espoo and 16 km in Helsinki. The construction started in 2019 and the double track construction is completed for 21 km.

The line will be operated by 29 bidirectional ForCity Smart Artic trams with the first being delivered this spring.

In 2023, the authorities expect to perform the final works, the introduction of the tests and test traffic. The new LRT connecting the two cities is expected to enter passenger operation in January 2024.