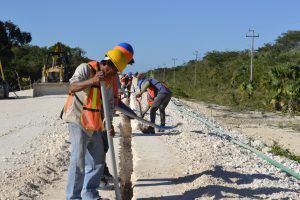 The first track has been laid on the Izamal – Cancún rail section (Section 4) of the Maya Train project while the works are continuing on other five sections (1, 2, 3, and 5). This milestone paves the way for the arrival and movement of ballast machines that represent the first resistance tests for sleepers as well as the definitive replacement of the tracks, ballast and fastenings. This section will be 257 km long served by 3 stations and will run in the states of Yucatán and Quintana Roo.

On the Cancún – Tulum rail (Section 5) the delivery of rails for the southern section has been completed while land land reconnaissance started in the area of Bahía Príncipe. Based on the dialogue and agreement, it was also determined that the Mayan Train will cross through Section 5 without passing through the urban area of Playa del Carmen to reduce the impact on third parties or the economic activity of the region. This 110 km section is divided into two sub-sections: the 49.8 km north section will link Cancún and Playa del Carmen and from there a 60.3 km south section will reach Tulum connecting the two airports (in Tulum and Cancún).

On the 228 km Section 1 (Palenque – Escárcega) the progress continues for sleepers’ manufacture at the plant established in El Triunfo, Balancán, which generates 330 jobs. It is expected that a maximum production volume of 1,500 sleepers per day will be reached in May with the contribution of national suppliers (for the delivery of steel, gravel and sand) to encourage the creation of new jobs.

The 172 km Calkiní – Izamal line is implemented as the Section 3 where the construction level crossings is progressing in Becal, Campeche, while the road overpass is realised and in Maxcanú, Yucatán, the foundation stage is being carried out.

Since started, the Maya Train project has already created 90,000 jobs in southeastern Mexico.

The entire project consists of an electric rail system of 1,500 km linking five states states – Chiapas, Tabasco, Campeche, Yucatán and Quintana Roo. The project is implemented on seven sections and is expected to be completed in 2023 when the new trains will provide transport services in Yucatán Peninsula.