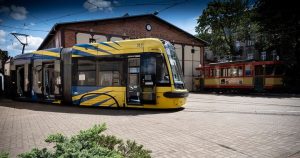 Pesa Bydgoszcz has won a tram contract under which 5 vehicles will be delivered to the Polish city of Torun.

Through the City Communication Facility, Torun will acquire 5 Swing five-section new trams under a PLN 46.4 million (EUR 10.5 million) offer made by the Polish manufacturer which was the sole bidder of the tender. MZK w Toruniu, the city’s public transport operator is expecting that the trams will be delivered within 24 months.

The fully low floor trams will be adapted for the passengers with disabilities. They will be equipped with air conditioning systems, Wi-Fi connection and USB charging sockets. They will also be fitted with monitoring and onboard computer systems, passengers counting system, as well as voice announcement and ticketing systems.

The tram contract is funded by the EU under the “Improving the functioning of urban transport in Toruń – BiT City II” project which has a total value of EUR 92 million, of which the Cohesion Fund contributs with EUR 45 million through the “Infrastructure and Environment” Operational Programme for the 2014-2020 programming period.

Beside the tram procurement, the project includes the construction of a new tram line connecting the centre of Toruń with the residential district of Jar in the northern part of the city and the comprehensive modernisation of other selected sections of tramway. The procurement of three technical vehicles for the maintenance of tram tracks and overhead lines also is supported by the European financing. 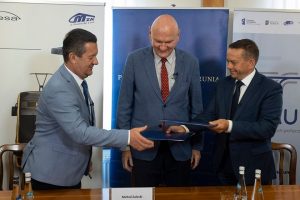 gramme also included the acquisition of 20 low-emission buses, of which 14 are hybrid  combining a conventional internal combustion engine propulsion system with an electric propulsion system, and six are fully electric.

The purchase of the 25 new public transport vehicles covered by the investment is expected to be completed by 2020, while by the following year, Toruń should have a total of 10.1 km of newly constructed tram line.

Toruń currently has five tram lines and around 40 bus routes. It also has three main railway stations and thus constitutes an important rail junction. Under BiT-City, the rail connection with Bydgoszcz has been modernised and new rolling stock purchased in order to cut journey times between the two cities and strengthen the territorial cohesion of the Bydgoszcz-Toruń metropolitan area. BiT-City also allows passengers to travel between and within the cities using a single ticket. The aim now is to further integrate the rail link with the urban transport systems of Toruń and Bydgoszcz, thus creating a fully unified network.