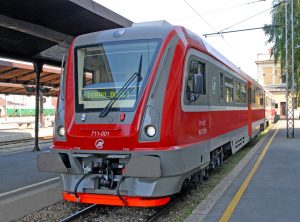 Transmashholding and Srbija Voz signed a 2-year post-warranty maintenance contract for DP-S diesel trains which operate on the regional network.

The DMUs were manufactured at TMH Mytishi Plant.

Under the agreement, TMH will conduct diagnostics, while the maintenance services will be performed with the railway operator.  The maintenance of the DMUs is conducted in six Serbian depots at Zrenjanin, Sombor, Ruma, Vrshats, Lapovo and Zaechar.

The DP-S diesel train consist of two head sections, or of four if operated as a multiple unit. Their design speed is 120 km/h, with a seated capacity of 120 for a two-car version train. The trains have special places for baby strollers, wheelchairs, bicycles, and luggage.

DP-S feature contemporary two-axis motorised and non-motorised bogies with two-stage swing suspension. The paint of the cars has anti-graffiti qualities, allowing for removal of drawings and inscriptions.

Under the contract, in 2011-2016, TMH has delivered Srbija Voz 39 DMUs. The Russian manufacturer has also organised staff training, procurement of spare parts and equipment, warranty maintenance with consulting, delegating own staff to the depots when needed.

The rolling stock produced by TMH amounts to 30% of the entire rail passenger fleet of Serbia.