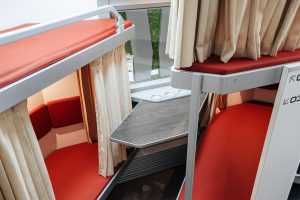 TMH and Federal Passenger Company, a subsidiary of Russian Railways, have presented the interior layout of a non-compartment passenger rail car, the co-called capsule coach during the Transport Week 2021 in Moscow.

The “herringbone” concept takes its name from the arrangement pattern of the berths, positioned diagonally to the aisle. The personal capsule and the open compartment are the two options considered for the coach interior. The personal capsule is designed for passengers, who travel by themselves and it is separated from the aisle with a wall and a curtain.  The open compartment is designed for passengers, who travel with company – family members, children, or other companions. Each passenger has access to personal charging stations, cloth hangers, wall pockets, and other utilities useful during a train journey. Extra luggage space is provided through shelves, mounted under the ceiling.

The capsule coach concept was designed by 2050.LAB exclusively for TMH. This is the third iteration in the series of concepts evaluating potential replacements for the “platzkart” layout, widespread in Russia. The uniting element of the series is individualisation of the environment such as tables, shelves, lighting, air vents, in which the passenger spends the journey. The concept was designed for loading gauge T, making it wider and longer compared to the current standard.

The length of the useable space inside the car is increased by 290 cm, the width of the car by 28 cm, and the length of sleeping berths by 15 cm.

The new interior is inspired by the results of focus-group sessions aimed at improving the experience of passengers. The “herringbone” coaches are intended for night express train services, and should be used for up to 12 hour journeys during the nighttime.