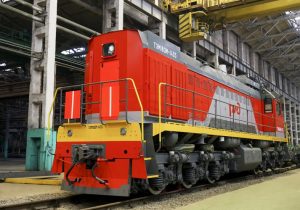 TMH Bryansk Plant obtained the certificate for the production of updated modifications of the TEM18DM shunting diesel locomotive. The first locomotives of the new modifications are available since the end of 2019.

The new modifications will widen the area of application and increase work efficiency. To reduce fuel consumption, most modifications will include a start-stop system, which is crucial during winter months. The system manages the machine’s operation mode and thermal utilities without driver’s involvement. It will shut down or launch a machine’s engine automatically, triggered by critically low or high temperatures.
Dehumidification unit for compressed air and electro-pneumatic lines will allow passenger train operation.
Six of the modifications are available to customers, with one being available for the operation on the 1435mm-gauge lines. The locomotives with 1435-gauge modifications will be shipped to Zabaikalskaya, Far East, and Kaliningradskaya railway companies.

TEM18DM locomotive is in production since 2008. It is currently one of the most in-demand locomotives, being used by Russian Railways, Russian industrial companies and by railway operators in CIS.