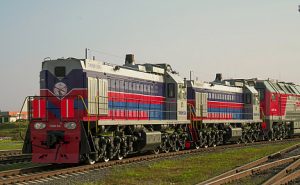 Bryansk Engineering Plant, part of Transmashholding, delivered Mongolia two TEM18DM diesel shunting locomotives under a contract signed in 2019 which will last until 2021.

The locomotives will operate the Ulan-Bator railway, where the shunting locomotives and 15 2TE25KM mainline freight locomotives are already in operation.

The TEM18DM shunting locomotives are operating in Mongolia since 2011 and in 2017 the first two 2TE25KM locomotives entered operation. The TEM18DM vehicles have proven effective activities. The reliability, ease of use and maintenance, comfort for locomotive crews and affordable cost are their main advantages.

Bryansk Engineering Plant is manufacturing the TEM18DM diesel locomotive since 2008.

In Russia and abroad there are currently operating more than 1,500 diesel locomotives of this series. The locomotives operate successfully in regions with a wide variety of climatic conditions such as in Surgut and Taishet (in Irkutsk Oblast) of in the industrial city of Norilsk, situated inside the Arctic Circle,  characterised with subarctic climate with severely cold and drier winters.

Theis type of locomotive has proved to be worthy in conditions of temperature changes, which is important for work in Mongolia.

The TEM18DM shunting locomotives are in demand not only to be used by the public transport companies, but also by the industrial enterprises with their own rolling stock fleet.
The new modifications of the TEM18DM diesel locomotive have been developed to expand the scope of application and increase the efficiency of work. There are six modifications in total, including enhanced protection, more space, voltage switchgear. Another modification involves the driver cab which now ensure that they are being effectively sealed against the ingress of dust and sand. The customers are be able to choose the most suitable option for themselves.  In January, the Bryansk Plant obtained the certification for serial production of the updated locomotives.