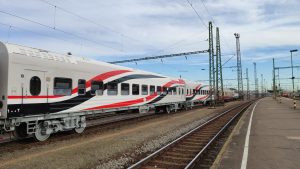 Transmashholding has completed the Dunakeszi Járműjavító-DJJ acquisition involving the rail business and industrial site in Hungary. Now TMH Hungary Invest, a 50-50 joint venture between TMH International and Magyar Vagon Hungarian investment company, owns 90% of the shares in the DJJ business.

“The completion of DJJ acquisition represents a major step forward in our global expansion strategy. DJJ will have the support of TMH, giving it significant opportunities to grow via its participation in national and international rail tenders,” Kirill Lipa, TMH CEO said.

Under the transaction, the management of DJJ is transferred to TMH Hungary. Founded in 1926, DJJ renovated trains and cars mainly for MAV. DJJ employs around 600 employees.

At DJJ plant, TMH and the Hungarian partners will construct 680 passenger coaches for the Egyptian National Railways, which represents the largest railway project in Dunakeszi.

To implement the project, a transfer of technology and production will start between the DJJ and TVZ factory in Russia, where the second half of the coaches is being manufactured. The first batch made at DJJ plant is planned for shipment in the fourth quarter 2020.

The first prototype passenger coach has completed certification tests in Hungary, under the supervision of BME-ITS experts.

The project is part of a EUR 1 billion contract awarded in 2018 by the ENR for the supply of 1,300 passenger cars which will be delivered until 2023.