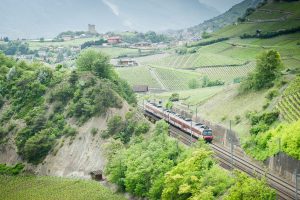 SBB, Thurbo and RegionAlps have shortlisted three manufactures for the delivery of 194 new electric multiple units which will replace the existing old trains.

Following a prequalification process, Alstom, Siemens and Stadler are the three manufactures that have to prepare their offer until mid-2021, which will be evaluated using detailed and precise award criteria.

The candidates were evaluated based on their economic performance, sustainable development measures, capacities and resources, quality management system as well as their compliance with the legal framework conditions.

The experience of the companies and their specificity in the market were also verified on the basis of a selected vehicle platform which was compared to the defined concepts of offers, infrastructure and timetables.

According to the plans, the contract is expected to be awarded by 2022 and the first trains would be delivered starting the 2026 timetable.

Under the base contract, SBB will have 106 EMUs, Region Alps 18 and Thurbo 70 trainsets. The contract is estimated at CHF 1.5 billion (EUR 1.4 billion).

The contract will include an option for the delivery of up to 316 trains including the provisioning of  maintenance services and the installation of the ETCS. In addition to the these 194 trains, the railway companies will probably need at least 100 more trains to replace all of the old vehicles and to enable the expansion of services decided by Parliament and the associated expected increases in traffic.

The trains will operate the RER network in Germany and Austria.

The three railway operators need new rolling stock in order to be able to continue to offer efficient and climate-friendly public transport services.

The trains are primarily intended to replace previous single-deck S-Bahn multiple units that have to be scrapped. SBB, Thurbo and RegionAlps rely on a proven vehicle concept and not a new development.  Thus, the companies have required a vehicle concept that has already proven itself in a European country.

The new train should be approved for transport operation in Switzerland, Germany and Austria. The procurement project is coordinated with the cantons concerned, which act as ordering parties in regional transport, and the Swiss Federal Office of Transport.

The trains are primarily intended to replace around 270 exiting trains, which will have to be decommissioned by the end of 2035 due to their service life.