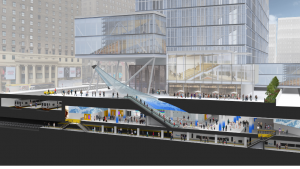 The qualified consortia are:

The project will bring Metro-North Railroad service into Penn Station by 2024, and create four new stations, fully accessible under the Americans with Disabilities Act, in the east Bronx.

The project is using the innovative “design-build” process in which a single firm or consortium is responsible for both the design and construction of a project. This process puts competitive pressure on bidders to harness innovation to identify faster ways to complete projects, and mitigate the impacts of construction, with the final contract imposing financial penalties for failure to adhere to a strict project timetable. 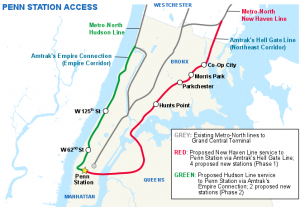 Metro-North Penn Station access is a transformative project that will introduce Metro-North service into New York’s Pennsylvania station, creating a second route for Metro-North to reach Manhattan and providing a direct, one-seat ride to the west side of Manhattan for customers in Connecticut, Westchester, and the Bronx. The project includes the construction of four new Metro-North stations in the eastern Bronx neighbourhoods, as well as other necessary railway infrastructure improvements to enhance the resiliency of Metro-North service.

Under the project, 5 km of new track on an existing right-of-way would need to be built and the existing infrastructure will be modernised.

Penn Station access is expected to draw new riders to public transit and generate major time savings for existing Metro-North customers. The MTA anticipates up to 50,000 trips will be made per day on the new route, including up to 20,000 that start or end at the four new stations in the Bronx.