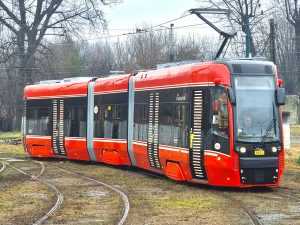 Pesa trams have been delivered ahead of schedule to Iasi, ​​Chorzów and Toruń. The end of the year was very busy for the employees of the Polish rolling stock manufacturer. The contract for the city of Iasi in Romania was completed earlier than assumed in the contracts, four out of five trams were delivered to Chorzów, and the first new Toruń Swing has just started on the routes with passengers.

The contract signed with Iasi in July 2020 assumed that the last of the 16 ordered trams would be delivered in February 2022. Pesa started the order on schedule and eventually even accelerated deliveries. 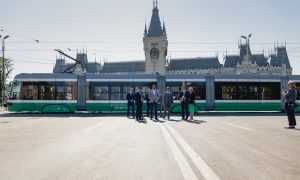 “All Swings are already in Romania, have been successfully tested, including supervised rides with passengers, and have been passed to the customer. This means that we finished deliveries two months ahead of schedule,” Marcin Grzyb, Pesa’s Sales Director for light rail vehicles, said.

“The tram that Pesa offered to Iasi was designed based on the best solutions of the 122 NaL-10 vehicle and was appropriately modified and adapted to the needs of the Romanian customer. As a result, it is well assessed by both drivers and passengers from the first operational trips. ” – adds Agnieszka Chomik, Iasi contract manager at Pesa. 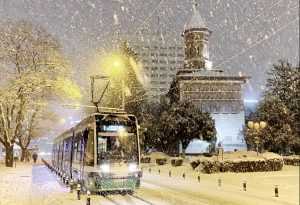 Swing Iasi is a classic and proven in many years of operation, 5-section vehicle with a length of 30 m, 100% low-floor, which can take up to 240 passengers, including almost 60 seated. The vehicle is ecological, and the low energy consumption has been confirmed by the SORT2 test. The trams have been equipped with modern control systems, on-line diagnostics, video monitoring and much more.

“Pesa trams delivered to Iasi from the first test drives gained recognition among drivers thanks to their innovation, quality and reliability. I am also convinced that our residents will appreciate the comfort of traveling with Swings. These trams represent a new quality and standard of our transport,” the head of the ICC Iasi, Cristian Stoica, said, after the first Swings were put into operation.

Iasi is one of the largest cities and the historic capital of Romania, located in the north-eastern part of the country, the capital of the region, an important administrative, industrial and university center. It has over 300,000 inhabitants.

Chorzów – first trams ahead of schedule

Pesa signed a contract with Silesian Trams in June 2018. After the completion of the basic order for 35 trams, TŚ exercised the right of option and ordered another 5 vehicles, which were to be delivered by the end of September 2022. Meanwhile, the first 4 of them have already been delivered to Silesia.

“The first 4 new Twists have already arrived in Chorzów. Three have already been picked up, we are finishing tests and acceptance of the fourth one, and we want to deliver the fifth one in January 2022, which means that we will close the contract more than half a year before the agreed deadline,” Dawid J jazdewski, the contract manager of Chorzów at Pesa said.

New Twists for Silesia are low-floor trams, equipped, among others with air conditioning, facilities for the disabled, electronic passenger information system, Wi-Fi and USB chargers for mobile devices. They use swivel bogies, which are characterised by better cooperation with the track, especially on curves.

In total, Pesa has so far delivered 69 trams to Silesian Trams of which 30 first-generation Twists and 39 new ones. After the end of deliveries in January 2022, passengers in Silesia will be carried by 70 modern trams manufactured in Bydgoszcz. 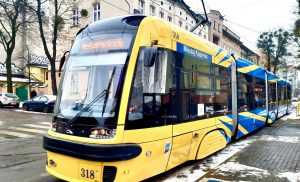 Nicolaus Copernicus, the newest Swing produced by Pesa for Toruń, has already started rides with passengers. Five modern trams from Pesa Bydgoszcz were to be delivered to Toruń in 2022, but two of them reached the city in December, three months ahead of schedule. Trams with side numbers 318 and 319 passed all the tests. 318 was named after Nicolaus Copernicus and is already carrying passengers, while the vehicle number 319 will be named after General Elżbieta Zawacka.

“Giving the name of Copernicus was an obvious choice,” says the president of Toruń, Michał Zaleski. The outstanding astronomer, who was born i Toruń, is our most famous citizen. There is also no doubt that General Elżbieta Zawacka should also have her own tram, an exceptional woman, a soldier of great courage, an emissary of the Home Army to the government in London, the only woman from the group of 316 “Cichociemni”. The vehicle under her patronage will be launched on the track on January 10, 2022, on the 13th anniversary of the death of Mrs. General, ” President Zaleski explained. 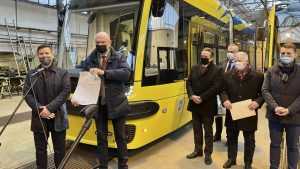 The first tram was delivered to the Toruń depot on the night of December 12-13, 2021, the next one a few days later, and the delivery of the remaining three is announced by Pesa for January and February 2022. The new 30-meter swings are adapted to the transport of disabled people, five-car, with a completely low non-slip floor, equipped with air conditioning, video monitoring, on-board computer and Wi-Fi. They have USB charging sockets, ticket machines, voice and visual announcements of stops, a passenger counting system and advertising monitors. They also have a larger number of seats than before – 49 plus four foldable ones.