The problem of investments in transport infrastructure concerns all states that are increasingly trying to ensure not only a system that responds to mobility, but also integration and economic growth. In the last two decades, transport investments were mainly focused on the modernisation and expansion of road infrastructure, but currently the focus is on sustainable transport modes that will offer not only environmentally friendly services, but also resilience in the face of various challenges. The railway is at the top of the priorities regarding the allocation of investments, where the next years will be dominated by this mode of transport which will have to rise to the challenge of decarbonising the transport system and at the same time provide the necessary capacity to take over the traffic flows from the modes with high emissions. In addition, high-speed rail becomes essential in the shift of air traffic to rail and its cross-border connections must be built to come up with offers that attract passengers and contribute to the elimination of a significant emissions.

Productivity and growth lead to economic development and prosperity, and this is deeply linked to the transport system of a region or a country, by giving access to industries and markets. Investments in transport infrastructure play a role in an area’s pull effect, attracting complementary investments, for example in the development of new residential spaces, offices, leisure spaces, new industries, or the expansion of existing ones, providing access to jobs and services, integration, and consolidation in the trade system. Here the list of complementary investments can continue favouring the development of a variety of services and products to which the final customer has access, determining a structural and economic chain transformation.

A transport system that is performing poorly or that is blocked cannot contribute to the balance of a society and can even lead to its dysfunction and trigger a crisis that becomes difficult to address. A short example can clarify the essential role of transport: the war in Ukraine, apart from the various damages and losses (not listed here because they are not the objective of this piece), caused the interruption and destruction of transport infrastructure and services which led to the identification of other routes particularly for freight traffic. This brought about the agri-food shortage which led to a wave of price increases, but also to the impossibility of transporting grains, which emphasises the importance of the transport system for society as well as the need to address such problems.

Apart from these considerations, one of the big factors that is starting to transform society is the problem raised by climate change, which leads to the need for investments in sustainable transport systems that offer capacity and efficiency and at the same time meet the needs of mobility of freight and passengers.

The International Energy Agency (IEA) specifies that transport represents 37% of CO2 emissions and has the greatest dependence on oil and fossil fuels, which it should no longer use in order to become a sustainable and efficient transport system. In the case of the goal of net zero emissions by 2050, the transport sector must reduce its emissions level by 20% by 2030, especially as demand is expected to increase.

In contrast to the other modes, the railway emits only about 5% of emissions and is one of the most energy-efficient modes of transport, using only 3% of the energy used by the transport sector. The IEA states that on average, rail transport requires 12 times less energy and emits up to 77 times less GHG per passenger-km than private road and air transport. Moreover, apart from maritime transport, rail freight transport is the most energy-efficient and the least carbon emitting of all freight transport modes. These analyses easily show what rail can mean in the process of decarbonising transport and focusing on sustainable, fast, integrated and connected services. 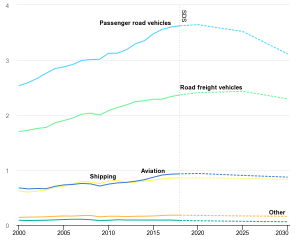 Even though it is a sustainable transport system, it has a share of 9% of global passenger transport and 7% of freight transport. In a context where global policies are focused on reducing the level of emissions, mainly from transport, there must be a shift from road traffic to rail traffic, even if road traffic also comes up with decarbonised solutions (such as electric cars, powered by hydrogen or hybrids). Given that environmental and climate policies, digitisation, and transformation of industries stand up, railway passenger transport must develop to reach a market share of over 13% by 2030, the year in which the potential to reach zero emissions in 2050 will be analysed.

The transformation of the transport sector and the acceleration of the shift to the two main sustainable modes – rail and inland waterway – require redesigning the entire system and addressing all the levers that can drive a real change with a positive impact on the environment. From policies and measures, to changes in behaviour in terms of mobility, to the transformation of the industry and the implementation of projects through investments that will accelerate the degree of digitisation, all will cause the creation of an integrated transport system.

It is clear that without investments, the abovementioned elements cannot be applied, as they support the application and implementation of all the proposed plans that will lead to the total reduction of emissions.

According to the GI Hub, a non-profit organisation formed by the G20, which has the role of promoting the infrastructure agenda in four sectors (energy, telecommunications, transport, and water), current investments require USD 94 trillion, but currently their value is USD 79 trillion, with a gap of USD 15 trillion. The estimates consider seven sectors (we said four sectors because the organisation takes into account every mode of transport) from 56 states and 5 regions.

The biggest gap regarding investments in infrastructure, namely USD 3.8 trillion, is in the United States of America, where current investments are USD 8.5 trillion, and the need is USD 12 trillion.

Depending on the continent, the best performing countries in terms of investment gap are Canada with USD 20 billion, in South America it is Uruguay with USD 10 billion, on the African continent there are two countries with the same gap, namely USD 14 billion (Benin and Côte d’Ivoire). In Asia, Cambodia is the country with the smallest gap, of USD 28 billion, while in the Eurasia region, Azerbaijan has a gap of USD 8 billion. Moving towards Europe, the smallest investment gap is recorded in Germany, with USD 728 million, where its current investments come to USD 1.5 trillion.

Regarding the transport infrastructure sector in four segments (air, rail, ports and road) there is a total gap of USD 10.1 trillion, because the total value of current investments is USD 39.8 trillion, and the necessary investments amount to USD 49.9 trillion.

In the case of the railway, the current investment trends are USD 10 trillion, and the necessary investments have a value of USD 11 trillion, the investment gap being USD 1.1 trillion.

Although in general the states have already announced their intentions to invest in the railway and have plans for modernisation, expansion and revitalisation, it is necessary that these projects be kicked off with a view to being completed on time in order to have a visible effect. Apart from reducing emissions, states must also secure a transport system with low energy consumption, which is not dependent on oil and focuses on alternative or low-carbon fuels. Electricity and hydrogen represent the most sustainable solutions for zero emissions and energy efficiency, both technologies being able to support passenger transport traffic. In addition, these solutions are seen as essential to accommodate traffic from the other modes and provide additional capacity to meet the expected growing demands. China, the European Union, India, Japan and Russia are the regions with the most concentrated infrastructure network for passenger services, given that together they account for 90% of the global passenger rail transport activity. 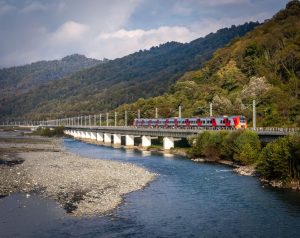 On the other hand, rail freight transport must be provided with the required capacity in order to handle the challenge of taking over road traffic to reduce emissions and impact on the environment. In addition, it has the ability to transport large volumes of goods without high emissions and high energy consumption – per carried tonne, freight trains are 8 times more energy-efficient and emit four times less GHG emissions compared to trucks. The leaders in this segment are China and the USA, which have the most intense activity in the transport of large volumes by rail, each of these two countries representing a quarter of the global rail freight transport, and both are trying to develop their network and activity in the segment of rail freight transport.

In Europe, the European Union’s strategy to form an intelligent and sustainable transport system aims at doubling rail freight traffic by 2050, an increase that will be supported by an operational, digitised and safe multimodal TEN-T network, but also by the political framework regarding charges, the national strategies for the growth of rail transport and the funds that the authorities could offer for the purpose of developing rail transport, complemented by other infrastructures.