31 October was the deadline for Member States to transpose the technical pillar of the Fourth Railway Package, granting the European Union Agency for Railways (ERA) powers needed to become Europe’s single certification body for rail vehicles and railway traffic operators.
This is an “important day for the European rail sector – the transposition deadline for the rail safety and interoperability directives. The full implementation of Fourth Railway Package across the whole EU is key to boost rail transport. I count on the Member States which haven’t transposed it yet to do their outmost to fulfil this obligation very soon. The implementation of its technical pillar will significantly simplify procedures and reduce costs for railway undertakings operating across Europe,” European Commissioner for Mobility and Transport Adina Vălean said.

In the past, train operators, manufacturers or anyone who planned to operate in or sell to clients in more than one Member State, had to apply for vehicle authorisations and safety certificates separately in every Member State concerned. From 31 October onwards, only one application must be filed through ERA’s One-Stop Shop IT tool (OSS). 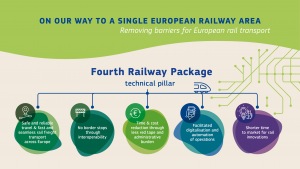 “After having started our new role of European authority with initially eight Member States in June 2019, we are crossing the finish line. We have already taken more than 1 000 decisions and authorised more than 10 000 vehicles. With the extension of our competence to the whole EU, we reach another milestone on the way to the Single European Railway Area, helping rail to become the transport mode of the 21st century,” Executive Director of ERA, Josef Doppelbauer, said.

The new, simplified procedure aims to reduce costs and administrative burden for the rail industry, it will make the European rail system more transparent, more efficient and therefore more competitive vis-à-vis other modes of transport.

The harmonised processes contribute to higher levels of safety, interoperability and reliability in the European rail network. The unique approach for vehicle authorisation will also reduce time-to-market for emerging technologies.

ERA has also become the single-entry point for the approval of ERTMS trackside that will gradually replace the different national schemes, to create a seamless European railway system.

The Fourth Railway Package was adopted by the European Parliament and the Council in 2016. It consists of the so-called market pillar which aims at increasing competition, and the technical pillar which aims at reducing costs and administrative burden for railway undertakings operating across the European Union. Due to the ongoing Coronavirus pandemic, the final transposition deadline was extended, giving Member States until 31 October 2020 to complete their process. With the transposition of the Fourth Railway Package new harmonised procedures will be applicable across the whole of the European rail network.