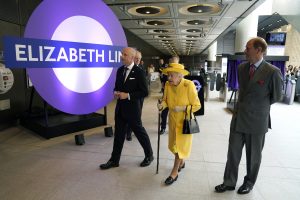 Her Majesty The Queen Elizabeth II of the United Kingdom and The Earl of Wessex visited Paddington Station to unveil a plaque stating that she had officially opened the Elizabeth line.

The Queen topped up an Oyster Card during a surprise visit at the station marking the Elizabeth line opening scheduled to enter services on 24 May with services between Paddington and Abbey Wood.

The Queen spent several minutes at the station before leaving, escorted by Prince Edward that has returned to take train journey from Paddington to Tottenham Court Road.

TfL Rail services from Reading and Heathrow to Paddington mainline, and Shenfield to Liverpool Street mainline will be rebranded to the Elizabeth line.

On 13 May the Office of Rail and Road (ORR) has issued approvals for all the Elizabeth line stations, with the exception of Bond Street, confirming the stations and infrastructure meet the requirements for passenger use.

Bond Street has been given the go-ahead only for safe evacuation procedures, as it will open for passengers later than the rest of the line.

ORR has also authorised the overall routeway for the Elizabeth line’s track and tunnel infrastructure, to allow trains to run through the central section.

ORR approved the Elizabeth line Class 345 fleet in 2020 and recently authorised use of the GSM-R system. This delivers digital, secure and dependable communications between drivers and signallers, helping increase safety, reduce delays and improve performance and providing a better experience for passengers.

The 100 km line is stretching from Reading and Heathrow in the west through central tunnels across to Shenfield and Abbey Wood in the east. The new railway built by Crossrail Ltd will stop at 41 accessible stations, 10 of them new, and is expected to serve around 200 million people each year.

The new line is set to be crucial to London’s recovery from the pandemic, helping avoid a car-led recovery by providing new journey options, supporting regeneration across the capital, and adding an estimated GBP 42 billion (EUR 49.4 billion) to the UK economy.