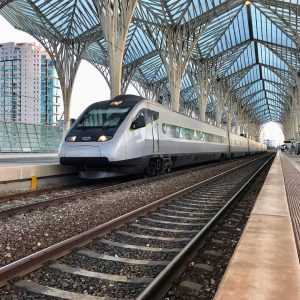 91% of Portuguese people want to shift their air travel towards rail by replacing the short-distance flights with the low-polluting and fast trains, according to the 2021-2022 Climate Survey published by the European Investment Bank (EIB). The report says that 77% of the Portuguese population feel that climate change has an impact on their everyday lives and 85% of the respondents favour stricter government measures, similar to the ones implemented to combat the Covid-19 crisis, that would impose changes on people’s behaviour.

“The expansion of the Trans-European Transport and Energy Networks (TENs) remains one of our key objectives as they increase the potential to generate trade, foster economic growth, boost competitiveness while reducing pollution. That is why, for example, we financed high-speed trains connecting Portugal and Spain, facilitating interoperable and efficient freight connections to and from the south of Portugal. We must crowd in resources from the private sector and invest in new disruptive technologies to achieve the climate goals we have set. It’s now or never – this is the critical decade to act,” EIB Vice-President Ricardo Mourinho Félix said.

Portugal is currently modernising and developing its rail infrastructure along the main corridors for a better integration with the European network and to promote the sustainable transport. Through the Ferrovia 2020 investment programme, the country wants to create a high-quality infrastructure to deliver freight and passenger segments better rail services supporting the modal shift. The implementation of the strategy is part of Portugal’s efforts to achieve climate neutrality by 2050 as the European Green Deal states.

EUR 2 billion is the value of Ferrovia 2020 which would result in more than 1,000 km of modernised rail lines covering the main connections to Spain and Europe. More than 80% of the initial foreseen investment is under construction or has been concluded, with over EUR 1 billion contracted of which EUR 200 million for signalling and telecommunications projects.

The strategy includes the modernisation of Aveiro-Salamanca-Medina del Campo (on the Beira Alta Line), preidentified section of Atlantic Corridor, the construction of Sines/Lisboa-Madrid high-speed rail line aiming at connecting the HSRL network in the Core Urban node of Madrid. The strategy also includes the modernisation of part of the Lisbon-Porto North Line and the electrification of over 400 km of existing lines.

Ferrovia 2020 also covers the deployment of the ERTMS, the extension of some selected train crossing sections to allow 750m-long freight trains and the preparation of Iberian gauge migration to the European gauge.

By implementing the selected projects, Portugal will strengthen its rail network and connections, will provide additional capacity and increased safety allowing the circulation of longer and fast trains, decreasing the travel times.