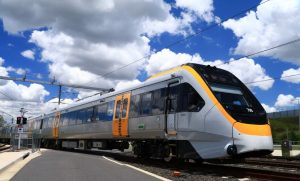 Under the contract, Bombardier will also maintain the entire fleet at its Wulkuraka maintenance centre near Ipswich, Queensland for a period of 32 years.

The trains have been tested and commissioned to the highest requirements of s Department of Transport and Main Roads (TMR) and Queensland Rail at the Wulkuraka maintenance facility. In addition, they have travelled more than 8 million in-service km and conducted over 150,000 passenger journeys since the first trains started service in December 2017.

Each train is equipped with 53 internal and external CCTV cameras with movement sensors, 36 LCD infotainment screens, with six in each car, and have open gangways fitted at each inter-car connection.

In 2019, Queensland Government awarded Bombardier Transportation a AUD 335.7 million (USD 227 million) contract to deliver modifications to the NGR trains currently being introduced to the South-East Queensland rail network. Bombardier is leading the Qtectic consortium contracted to deliver the NGR project and will undertake the work to upgrade the trains in line with the government’s revised design specifications with an industry partner.

The New Generation Rollingstock project will boost rail transport in South East Queensland to meet the growing demand for rail services.  The government is investing AUD 4.4 billion (USD 2.97 billion) over 32 years to fund the project, which included the construction and maintenance of the 75 trains, the construction of a purpose-built maintenance centre at Wulkuraka, west of Ipswich and the procurement of 3 NGR training simulators for train crew.