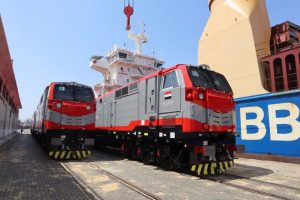 The last batch of 10 Evolution Series Locomotives has arrived at Port of Alexandria on March 31, that will enter transport services on the Egyptian rail network.

The delivery is part of an agreement signed in 2017 with General Electric for the supply of 110 locomotives and the rehabilitation of 81 out-of-service vehicles that were supplied several years ago.

In December 2019, the Egyptian National Railway received the first batch of 10 locomotives from GE Transportation that was acquired by Wabtec Corporation in February 2019.

In September 2020, Kamel al-Wazir, the Minister of Transport, witnessed the arrival of the fifth batch of 50 new locomotives at Alexandria Port. They were transported on the Alexandria – Cairo railway route and entered tests.

In 2017 General Electric, Egyptian National Railways (ENR), and the Ministry of Transportation (MoT) signed an agreement for the delivery of the new locomotives and rehabilitation of the existing fleet as well as the supply of maintenance services and spare parts required for 181 locomotives. According to Egyptian National Railways the contract has a total value of USD 602 million.

The agreement, which is the largest ever between the two parties, also includes technical training aimed at improving local capabilities and technical skills for more than 275 ENR engineers and employees in region.

The ES30ACi Light Evolution Series Locomotives can be used for both passengers and freight rail. They are equipped with a 12-cylinder, 3,200 horsepower GE Evolution Series engine. The locomotive delivers high power output to enable enhanced productivity and flexibility in heavy haul operations, as well as enhanced reliability.

The new vehicles will help Egypt to move 15 per cent of the country’s freight by rail by 2030.