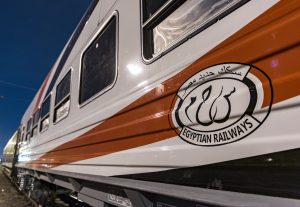 The Egyptian National Railways (ENR) started the commercial operation of three new passenger trains, made up of TMH coaches produced at Tver Plant.

The new coaches have been put into commercial operation on the Cairo – Alexandria, Cairo – Asyut and Cairo – Sohag railway routes.

They fully comply with safety regulations while providing the modern level of comfort. Their lifecycle in both continental and coastal environments of Egypt is 40 years.

This first batch of TMH coaches was delivered in July. Counting in the previously delivered prototype for testing and certification purposes, it consisted of 33 units. The prototypes have successfully passed all homologation procedures in Russia, Hungary, and Egypt.

Under the contract, all the new coaches will have to be delivered within 5 years from contract signing.

The contract also includes a 5-year warranty period and the fleet maintenance.

According to the contract, 680 coaches will be produced in Hungary, the remaining ones being manufactured in Russia at TMH Tver factory, which is responsible for the transfer of technology.

In Hungary, the coaches will be manufactured at Dunakeszi plant acquired by TMH and its Hungarian partner Magyar Vagon in a 50-50 joint-venture. The transaction was completed in June 2020 and also involves a transfer of technology. The project includes 51% of Hungarian content, helping reinvigorate Hungarian rolling stock manufacturing and create jobs.

It is planned that the first coaches for ENR will be delivered from Hungary by the end of the year.

The rolling stock procurement project is funded by the Hungarian and Russian export-import banks.