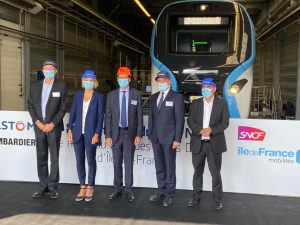 Alstom-Bombardier consortium has unveiled the first of the new RER train for Paris during a ceremony held on September 18 at Valenciennes the largest of Alstom’s 13 sites in France.

The event was attended by the president of Île-de-France Mobilités, Valérie Pécresse, the CEO of SNCF, Jean-Pierre Farandou, the CEO of Alstom, Henri Poupart-Lafarge and the Chairman of Bombardier Transport France, Laurent Bouyer.

The new trains, called the RER Next Generation (RERNG) will enter passenger services starting the end of 2021 on the lines D and E. They will also be deployed at the end of 2022 on the new western section of Paris RER E line extension to Nanterre and in 2024 other such trains will enter transport services on Mantes-la-Jolie line. 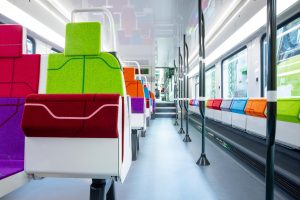 The future Île-de-France RER trains will have spacious platforms, a fully open gangways, without separation between the cars, with 2m-wide exterior doors distributed regularly throughout the train to facilitate the passenger flow. They have single-deck end coaches and double-deck coaches equipped with air conditioning system, information system for passengers, strong lighting, multiple USB ports and enhanced video protection.

1.23 million passengers will use the new trains on a daily basis when all the fleet will be delivered comprising 255 trains. The trains are also expected to reduce the pressure on the lines A, B and D by 10-15%.

Five spaces are distributed all along the train and allow passengers to easily find their place. The lighting has been designed for each space and helps to simplify movement inside the train and improve travel comfort. The new RER train for Paris has a reception area, a lower room, an upper room, wheelchair user space and the end vehicle room.

The new RERNG train provides reliable and comfortable transport services and is specifically designed for the dense areas that characterise traffic in Ile-de-France. 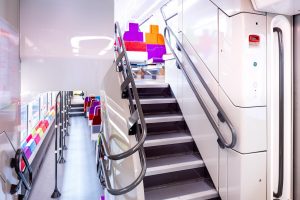 The new trains are part of a framework contract signed in 2017 for the supply of 255 trains, of which 130 will be for the RER D and 125 for the RER E. EUR 3.75 billion is the value of the contract signed between SNCF and an Alstom-led consortium which includes Bombardier.

In 2019, the Alstom-Bombardier consortium was also awarded by Île-de-France Mobilités and RATP a EUR 530 million contract for the supply of 44 metro trains with options for up to 410 trains.

Recently, Alstom has signed the sale and purchase agreement for the acquisition of Bombardier Transportation.