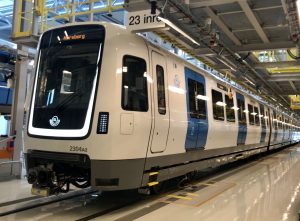 The Movia C30 metro trainsets will progressively replace existing older trains on the Red Line, which connects the north-eastern and south-western suburbs directly with the city centre.

The four-car train has a driver’s cab at each end. Each train has a seating capacity reaches 140 passengers in four-by-four configuration with additional seats along the vehicles’ sides, as well as standing areas and multi-purpose spaces to optimise comfort, capacity and passenger flow.

Three bi-parting sliding doors per side per car, speed up entry and exit at stations.

The Movia C30 trainsets are equipped with air-conditioning system. They meet the highest environmental standards for energy consumption and are constructed from materials which are 98 per cent recyclable.

The Mitrac propulsion system made in Västerås, Sweden, and the energy-efficient Flexx Eco bogies contribute towards reducing maintenance costs and increasing the energy efficiency of the trains, while further enhancing the passenger experience by minimising noise and providing a smooth, comfortable ride.

The 750V dc third rail trains are being assembled in Hennigsdorf, Germany and they are delivered to Sweden by rail to SL’s new maintenance depot in Norsborg.

The carbodies are manufactured by BST, Bombardier’s Chinese JV, and the trains are equipped with the OrbiFlo remote condition monitoring technology, developed in Sweden.

In 2013, SL awarded Bombardier a contract for the delivery of 96 four-car metro trains which were homologated for passenger service in June 2019, followed by further testing to ensure their readiness to operate on SL’s network. On delivery to SL, there is a period of trial running on the network before the trains begin passenger service.

The Movia C30 metro trains for Stockholm won Bombardier the coveted Good Design® award in January 2017. The award recognised the metro vehicle’s striking exterior design which is a clear expression of Scandinavian style that will become an unmistakable city icon.