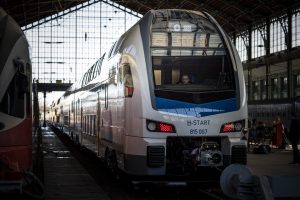 MÁV – Start has put into operation the first of 40 Kiss double-deck EMU trains on the Budapest-Nyugati–Cegléd–Szolnok rail route. By 2022, the Hungarian rail operator will deploy 40 EMUs delivered by Stadler, under a contract signed in 2017 which included several additional options.

The first 11 six-car EMUs will enter operation. Starting April, another new six-car EMU will enter services on the Budapest-Nyugati–Vác–Szob line, followed by other six units in July, while in August the 11th vehicle is expected to serve passenger operations.

The first phase of the train deployment includes transport services to Cegléd and Vác, the two busiest suburban lines.

The last 21 train will enter services at the end of 2022 on Budapest railway network which will be operated by Kiss, Flirt and Desiro trains.

Under the contract with Stadler, the first 11 Kiss EMUs ordered in 2017 were delivered in July 2019. In September 2019, MÁV – Start exercised its final option envisaging the procurement of 21 Kiss EMUs.

The 155.88 meter-long, 2.8 meter-wide and 4.6-meter-high multiple units consist of six coaches. The train has 600 seats, that is 50% more passengers compared to a single-deck unit with the same length.
They are designed to run at a top speed of 160 km/h.