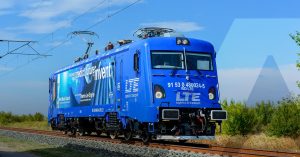 The LEMA 6000 kW locomotives have been designed for universal use and are suitable for the traction of very heavy trains that, among others, operate on heavily icy or snow- and leaf-covered tracks.

The electric locomotives can operate in cross-border traffic throughout the European Union, on routes with an overhead line voltage of 15kV or 25kV.

In March 2022, Softronic has launched a tender for the delivery of “automatic command control equipment”, as part of the “Innovation of the electric locomotive LEMA in order to increase energy efficiency” project which has received European funding through the European Regional Development Fund (ERDF) under the Competitiveness Operational Programme 2014-2020.

The new signalling system will ensure that the locomotives will be able to run smoothly on the railway networks of Romania, Hungary, Slovenia and Croatia. The vehicles will also be equipped with the national train control system MIREL that will be implemented by the HMH company from Slovenia.