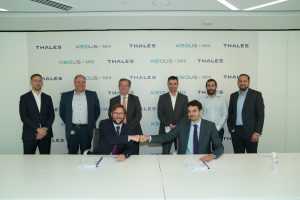 The Keolis-MHI joint venture awarded Thales a contract to provide to maintain the signalling and communications equipment of Dubai Metro.
Thales will provide corrective and predictive maintenance, on-demand system enhancements, repairs and spares for the Red and Green metro lines and the Route 2020 extension.

For the Dubai metro lines, Thales has equipped the driverless trains with a range of solutions, including SelTrac signalling technology, integrated supervision, telecommunications, passenger services, security and automated fare collection systems powered by Thales’s Transcity Up solution and PG600 gates.

For the city’s fully driverless and automated metro network, Thales has provided the level 4 communications-based train control (CBTC) technology which increases transport capacity by reducing the time interval between trains.

In March, Dubai Roads and Transport Authority (RTA) awarded Keolis-MHI a 9-year operation and maintenance contract with three possible 2-year extensions totalling 6 years. The contract worth EUR 125 million per year and covers the Dubai metro and tram networks covering a length of 90 km with 15.8 km of tunnel and 53 fully air-conditioned stations. The metro network is operated by 129 metro trains of which 79 Kinki Sharyo metro trains delivered by Mitsubishi in 2009 and 50 Metropolis trains built by Alstom.

The contract also covers the operation and maintenance of the automated metro and fare systems and full coordination and integration of Dubai’s metro, tram and other means of transport.

The joint venture is led by Keolis (70 per cent) and includes Mitsubishi Heavy Industries (MHI with 25 per cent) and Mitsubishi Corporation (MC), which have both been heavily involved in the construction and development of Dubai metro network since 2005.

The city’s tram network has a length of 10.6 km served by 11 stations and is operated by 11 Citadis trams delivered by Alstom. The catenary-free tram network was opened in 2014 and is using the APS ground-level power supply system developed by Alstom.