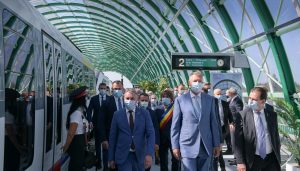 “I am inaugurating this new transport connection and as I am sending a strong signal to speed up the infrastructure investments. We must meet the deadlines and keep up with all transport infrastructure projects as there is much to be done in our country,” Klaus Iohannis said.

Previously, other track tests were performed using a train owned by a private railway transport operator.

According to the Minister of Transport, the new line will enter commercial services in December, after all trials will be successfully performed. According to estimations, the time travel to the airport will take 17 minutes.

The 19.5 km line starts from Odaile stop on a 600m-long section, crossing a 900m consolidated section and a 1.52 km viaduct over the National Road 1, to the railway station at the Arrivals Terminal of Henri Coanda airport. The project included the modernisation of a 7.8 km double-track line between Mogosoaia and Balotesti, and the construction of the 3-km rail link to the aiport terminal.

The project on the modernisation of Gara de Nord-Otopeni railway line as the first phase includes the aiport’s T1 terminal connection involves the construction of a 2.95 km single track, three bridges and a 1.52 km viaduct.

In September, the president has also inaugurated Bucharest metro Line 5 with a length of 7 km and 10 stations.