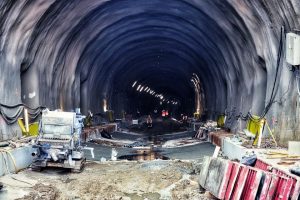 The German and Czech railway infrastructure managers, DB Netz and SZ, have announced a public tender for design work of the zoning decision documentation under the Dresden–Prague railway project. The documentation processing on the phase of pre-project preparation is expected to start in January 2021 ending in December 2024.

The offers must be submitted by 22 September 2020.

The tender for the documentation for zoning decision involves the railway tunnel to be built through the Ore Mountains.

The contract will be awarded based on the 2019 cooperation agreement for project preparation jointly concluded by SZ, DB Netz and DB Energie.

According to the project, the twin-tube tunnel will have a length of 26 km crossing the two countries, of which 15 km will be on the German territory, while 11.4 km in Czech Republic.

The design work of the project will be carried out using the principles of BIM – Building Information Modelling methods. Familiarisation of potential suppliers with the method of awarding public contracts under German law through a preliminary market consultation took place in Prague at the beginning of this year. The participation of more than 70 potential suppliers from various European countries confirmed that the preparation of this project is a matter of pan-European importance.

In May, the two companies have published an invitation to the tender for project’s management and coordination on the preparation methods and specific common public tenders.

An important agreement on the construction of the new railway connection was signed this year by the transport ministers and the infrastructure managers of the Czech Republic and Germany.

The railway line will cut the distance between Dresden and Prague by 56 km, reducing the travel time to one hour form currently two hours.

The new railway line Dresden–Prague railway will increase the offer of regional passenger railway transport thanks to significantly shorter travel times, it will shift a large part of freight transport from road to rail and will connect the Czech Republic to the Western European high-speed rail network.