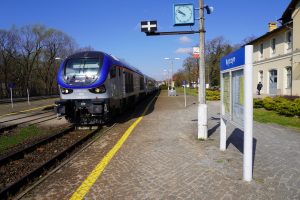 PKP Polish Railway Lines has launched the tender for the modernisation and electrification of the Giżycko – Korsze, the second section on the Ełk – Korsze line.

PLN 649 million (EUR 139.5 million) is the value of the contract which obtained a PLN 499 million (EUR 107.27 million) co-financing from the European Union under the Operational Programme Infrastructure and Environment (OPI&E).

The works are scheduled to be carried out after 2023.

The tender covers the 50 km rail section between Giżycko and Korsze which is part of the entire reconstruction project of the 100 km Ełk – Korsze railway.

To provide increased accessibility, the winner of the contract will also perform works at four stations, including Korsze, and at five stops. The platforms will be adapted to the needs of people with reduced mobility.

As part of the investment, tracks and railway traffic control devices will be replaced. The increase in the level of safety will be ensured by the reconstruction of 38 rail – road crossings and 84 engineering structures, including bridges and viaducts. Works also include the construction of a local control centre in Korsze and the Sterławki Wielkie road viaduct which will ensure efficient and safe train traffic.

When completed, the trains will be able to run at a speed of 160 km/h, from currently 80 km/h providing shortened journeys from Olsztyn to Ełk via Korsze and Giżycko by 50 minutes. Following the project completion, the travel time will be less than 2 hours.

The line electrification will provide faster and more efficient travel. It will not be necessary to change the locomotive from electric to diesel, which will also translate into a shorter journey time. The capacity of the route will also increase, which means that the travel offer may be more attractive, as more trains will be able to run along the railway line.

As part of the first stage of the investment, the first works related to the electrification of the route begin on the Ełk – Giżycko section. Already a contractor collects materials and prepares the site for future works. Special equipment will install the foundations for the poles on which the overhead contact line will be installed and the old infrastructure at stations and stops is being dismantled.

The works on the Ełk – Giżycko section as part of the project “Works on the railway line No. 38 on the Ełk – Korsze line, including electrification” are scheduled until the first quarter of 2024.

The project will facilitate travel in the Warmian-Masurian Voivodeship in northeast Poland and on country’s railway network offering increased access, faster and more comfortable journeys.