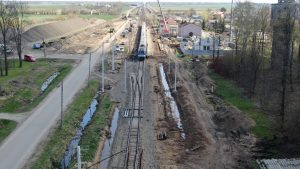 A PLN 200 million (EUR 44 million) tender covers the construction works on Grodzisk Mazowiecki – Zawiercie section of the Central Railway Line. The project involves track and traction works along the 220 km rail section. For the smooth passage at the selected locations, the rails, sleepers, and ballast cleaning are planned. Track works are scheduled to be completed in 2023. The works are coordinated with other tasks implemented and planned on the Central Trunk Line.

The tender is part of the second stage on the modernization of the railway line No. 4 – Central Trunk Line.

The CMK will ensure even better travel between the crossed regions, as PKP Polish Railway Lines increases the technical characteristics of the route. The investment will result in shorter travel times by train in long-distance routes between Warsaw, Krakow, Katowice and Wrocław, and more attractive connections from the Łódź regions and Świętokrzyskie region, in south-central Poland.

Along the Central Trunk Line, road viaducts are being built, which will replace the level crossings and bridges are being reconstructed. At the end of 2023, after completing the necessary works and launching the ERTMS/GSM-R system and the ETCS level 2 system, the trains will run at a speed of up to 250 km/h. Trains will run more efficiently after replacing the traction network on the route connecting the Mazowieckie and Łódzkie provinces.

The second tender has a value of PLN 46 million (EUR 10.1 million) and covers the traction network between Radom and Tomaszów Mazowiecki on the line connecting the voivodeship Mazowieckie and Łódzkie. The project includes the replacement of the contact line along 40 km of tracks. The works concern one track on the sections: Drzewica – Przysucha – Wolanów, Radom Krychnowice – Radom and at the stations Radzice, Przysucha and Radom Krychnowice.

The project which covers the two tenders is planned to start in 2022 and to be completed in 2023. When the works will be completed, the freight trains will runt at 120 km/h. The works are a continuation of already completed works. Passenger services at five stops were improved on the line between Radom and Tomaszów Mazowiecki. In addition to the replacement of the traction network, PLK performs track works on the interregional route, which also contribute to the improvement of train conditions.

In January, the rail infrastructure manager has signed a EUR 9.87 million contract to modernise 21 bridges and viaducts along the CMK.