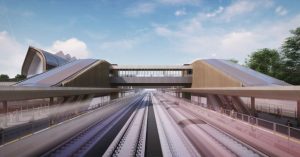 HS2 Ltd launched the tender for the contractors to deliver high voltage power supply systems, estimated at £523 million (EUR 581 million). A shortlist is expected to be announced next year, with contract award in 2022.

The tender follows the government’s recently green light for the start of construction of the new high-speed line linking London, Birmingham and the north of England. The the Notice to proceed has been issued in April.

The winner of the contract will be responsible for the design as well as manufacture, supply, installation, testing, commissioning and maintenance of the HV power supply systems.

The HV power systems contract will be a single stage procurement, with the successful bidder delivering two separate contracts covering design & build and maintenance services within HS2 Phase One and Phase 2a – from London to Crewe, where HS2 services will join the existing west coast main line.

The traction power sub-stations are located at multidisciplinary railway systems compounds which are situated in the open route section of the line. The contractor will assume the role of principal contractor within these compounds. The successful bidder will be expected to work closely with HS2’s other rail systems suppliers to ensure integration of its design and throughout construction, testing and commissioning.

50 traction sub-stations will be built alongside the line between London and Crewe in order to deliver power from the National Grid to the trains. The contractor will also deliver a dedicated HV non-traction power network that will provide power to stations, shafts, portals, depots and railway systems along the route.

This year, HS2 Ltd has launched main tenders for the new high-speed railway line which include the procurement for the overhead catenary system, signalling and control systems as well as track systems for 280 km of track as part of the Phase One.