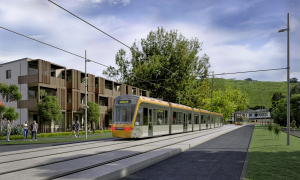 The light rail line will be 24 km long with up to 18 stations providing transport connections between the City Centre to Māngere and the airport. It was chosen out of three options, so that rapid transit can be expanded in the future and eventually connect with other lines to the North Shore and North West.

In February 2022, the authorities announced that the light rail line will be partially underground which will bring the project’s value to NZD 14.6 billion (USD 9.2 billion). the tunnelled option will provides a high-capacity service supporting future integration with light rail lines to the North Shore and North-West in the city centre.

The “Auckland Light Rail project will include a tunnelled light rail from Wynyard Quarter to Mt Roskill, continuing above ground to the airport running parallel to the SH20 motorway, with the provision of safe walking and cycling options along the corridor and with connections to all stations,” the minister said when announcing the tender process.

The line will provide transport connection with the commuter rail system and the bus network, including the City Rail Link, allowing faster trips and reduced emissions.

The Auckland LRT will run every five minutes and will have a capacity to carry up to 15,000 passengers per hour at peak, “four times more passengers than a dedicated busway or trackless trams,” the minister explains. According to the estimations, there would be around 40,000 boardings per day in the years following opening expected for 2031 and the passenger traffic will increase to 65,000 boardings per day by 2051.

The tender process for Auckland light rail is being co-ordinated with the tender process for the Additional Waitematā Harbour Connections project – launched at the same day – in order to ensure that the industry professionals who plan and design these projects are able to best plan for the pipeline of infrastructure work.