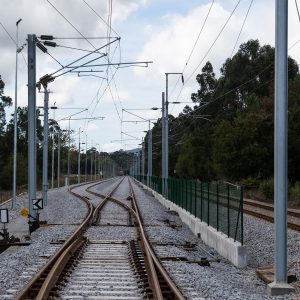 Infraestruturas de Portugal has launched the tender for the electrification of Tunes-Lagos rail section part of the Algarve Line in southern Portugal. Previously, the company has issued a tender for this project, but it was cancelled due to high costs proposals submitted to the auction.

The tender covers the electrification of 45 km of line in the 25 kV/50Hz system with an estimated value of EUR 30 million.

The entire project will be carried out within two contracts. The first one covers the electrification of Faro-Vila Real de Santo António rail for which the contract was signed on July 27.

This action will be part of the application to be submitted under Compete 2020 programme, with a European funding of 85%. Recently, Portugal has put into service the last rail electrified section of Minho line which now is operated by electric trains.

The project will allow the introduction of electric trains along the entire line, resulting in environmental benefits and improvement of the quality of the rolling stock and will improve the mobility in the Algarve metropolitan area.

The electrification project of the Algarve Line is part of the Investment Programme called “Complementary Corridors”, which aims to electrify three rail sections:

The Algarve Line (Linha do Algarve) is 139 km long and crosses the country from west to east, starting from Lagos station to Vila Real de Santo Antonio station. The Tunes and Faro stations are providing rail connections to express services towards Lisbon.