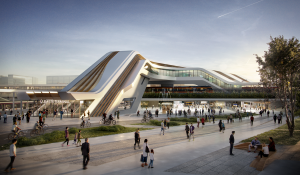 “For the past year, we have been hard at work on the preliminary design of Rail Baltica’s Ülemiste joint terminal, and now we have reached a solution that takes into account the wishes of various stakeholders, available opportunities, and the area’s future development plans. We hope to begin construction already in 2021,” Tõnu Grünberg, the Chairman of the Management Board of Rail Baltic Estonia, said.

All existing public transport, such as the tramway services, rail traffic, as well as motor vehicle and bus transport, must remain operational on Suur- Sõjamäe Road and around the T1 Mall of Tallinn throughout the construction phase. The railway connection with a track gauge of 1,520 mm, for which the public procurement tender is scheduled for the end of 2021, must be operational at its new location in the second half of 2023.

“The Rail Baltica Ülemiste terminal is bound to become an innovative and forward-looking transport hub that delivers the best possible passenger experience. Additionally, the new terminal building and the adjacent public space will bring new life to the surrounding area,” Gianluca Racana, Member of the Management Board of Zaha Hadid Architects, said.

he new terminal will serve railway lines with track gauges 1,435 mm and 1,520 mm, both those that start from the Ülemiste station, as well as those passing through. The Ülemiste terminal shall also accommodate both city and national bus transport, and if possible, also international bus lines. The terminal’s building will have three platforms that will be accessible both from inside the terminal, as well as directly from the city square under the railway tracks.

The terminal is entirely based on accessibility concept which combines the “solutions for different modes of transport in a unique manner, primarily focusing on the well-being of pedestrians and non-motorised transport. The new energy and resource-efficient terminal building will also accommodate public transport, which is by nature an environmentally sound mode of transport,” Kadi Metsmaa, the CEO of Esplan OÜ explained.