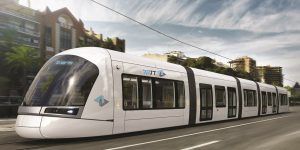 Under the PPP contract, the consortium will be responsible for the design, construction, maintenance and finance the project.

5 consortia submitted their bids, but the NTA Tender Committee decided to reject the offer of CRCC, Shikun and Binui Holdings and Egged Israel Transport Cooperative Society. Recently, the transport authority has awarded a EUR 1 billion contract for the Purple Line construction.

Announcing the selected partners for the two projects, Haim Glick, the CEO of NTA said that “this is great news for the residents of Gush Dan [Tel Aviv and its metropolitan area]. The light rail network is taking a significant step forward” which will provide increased transport services and access to the public transport for all passengers.

The LRT will provide transport access from north to south along the coast between Tel Aviv and Herzliya, and enabling accessibility to the employment centers in Ramat Hahayal, Tel Aviv University, Holon, and Rishon Lezion.

On the northern section, from the Einstein station, the line will have a 13-station branch to Neve Sharet (in the Northeastern part of the city) crossing the Yarkon Park. The southern section will be also split to a branch through Holon and Rishon Lezion, ending at Agricultural Centre.

The new Green LRT is expected to enter commercial operation in 2027 connecting the southern districts of the Gush Dan metropolitan area – Holon and the outskirts of Rishon Lezion – with the city of Tel Aviv.

The new light rail line will have connections with the 27 km Purple Line at Levinsky Tel Aviv station and at the Moshe Dayan station will be connected to the 24 km Red Line expected to be become operational by the end of this year. The line is also designed with links to the Yellow, Blue and Pink lines.