Warsaw Public Transport Authority (ZTM) and the consortium of Egis – TransEko signed the contract for the development of the technical study for the city’s metro Line 3.  Under the PLN 1.9 million (EUR 445 thousand) contract, the consortium will submit the study within 12 months.

The consortium will perform station and route analysis for the first section of the Line 3, between National Stadium station and Gocław station.

Comparative analysis of the three variants of the course of the third metro line should be made concerning functional and transport criteria (including transport volumes, integration of the public transport system, numbers residents), spacious (collisions with vicinity), environmental (environmental impacts and conditions residence) and economic. 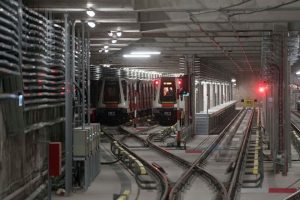 The contract will be executed within two phases. The first one includes the preparation of the preliminary report which will be submitted within 3 months. For each of the variants, the initial report should contain a preliminary analysis regarding the localisation of the new line and stations, the surroundings of the planned metro route, transport conditions, technical possibilities as well as public transport integration at the metro stations.
Under the second stage of the contract, the consortium will develop a technical study which is expected to be completed within 9 months.

Besides Egis – TransEko consortium, four other interested companies have applied for the tender.

The Line 3, which will have a connection with the Line 2, at National Stadium station, will provide a transport link across Praga-Południe district, located on the east bank of the Vistula River.