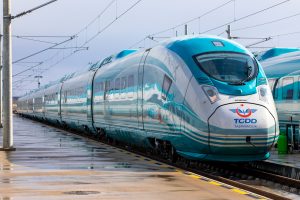 As of June 2021, the whole Velaro fleet is expected to be available for the commercial services.

The last 12 high-speed trains ordered from Siemens Mobility had reached Ankara. “The sets will be used on the high-speed 1,213-km line and on lines that are being built and will be put into operation,” said Adil Karaismailoğlu, Minister of Transport and Infrastructure of Turkey.

The trains connect Ankara with Konya and Eskisehir. An additional line to Istanbul, with a total length of 533 km, is planned for the future.

The first Velaro Turkey was ordered in 2013 and went into passenger service between Ankara and Konya in May 2015. At the same time, TCDD signed a second contract with Siemens for six 8-car high-speed trains. The last twelve 8-car Velaro TR trains were ordered in 2018 and 2019. The contract included maintenance, repair, and cleaning of the trains for a period of three years. With the delivery well ahead of schedule, a record time for the start of passenger operation could be achieved. On average, the time between the contract signing and passenger operation amounts to 24 months.

The Velaro high-speed trains for Turkey offer an optimised capacity profile and enhanced passenger experience. Passengers can choose between three car classes. The Business Class consists of three compartments with four comfort seats each, the First Class offers 45 seats, and the Economy Class is providing 426 seats.

The restaurant car offers eight bistro seats in the bar and 28 seats in the restaurant. Through innovative communication and entertainment systems on board, passengers can access services such as video on demand, e-books, or games from their own mobile devices or, in the Business and First Class from touch displays integrated in the seats.