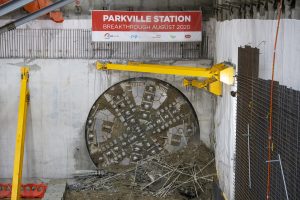 The first Melbourne Metro TMB has broken through at Parkville station, completing the second leg of her journey after tunnelling 1.4 km section from the Arden station site, where it was launched in May 2020.

The tunnel boring machine (TBM) Joan carved her way into the station box 20 metres under Grattan Street, installing over 5,100 concrete segments to line this section of the Metro Tunnel.

“It’s fantastic to see Joan arrive at the future Parkville station. The Metro Tunnel is working through the pandemic supporting thousands of jobs, while creating the new space to run more trains more often. I thank everyone on the project for their hard work,” Minister for Transport Jacinta Allan said.

The breakthrough of TBM Joan at Parkville follows the completion of the 1.2 km rail tunnels between Arden and the western tunnel entrance in Kensington earlier this year, bringing its total distance travelled to 2.6 km.

TBM Joan will now be moved through the Parkville station box, where it will be cleaned and recommissioned before being relaunched towards the new State Library station site in the CBD.

The project’s TBM Meg, which is tunnelling parallel to Joan from Arden to Parkville is expected to arrive at the station in the coming weeks.

Tunnelling is currently at peak operations with all four of the Melbourne Metro TMBs now digging the twin tunnels across Melbourne.

The third and fourth TBMs Millie and Alice were launched in April and May respectively and  are currently tunnelling the 1.7 km journey towards the eastern tunnel entrance in South Yarra, having been launched from the Anzac station site earlier this year.

The four TBMs have together excavated more than 290,000 cubic metres of rock and soil and installed more than 23,000 concrete segments to form rings lining the new tunnels.