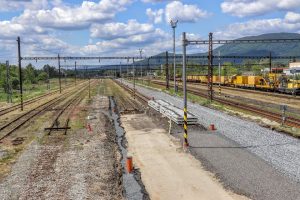 Správa železnic, SZ, has signed the contract for the reconstruction of Czech-Poland railway line from Dětmarovice to the state border via Petrovice u Karviné.

The CZK 2.65 billion (EUR 99.4 million) contract was signed with Společnost Dětmarovice consortium comprising Strabag Rail – OHL ŽS. The project, which has a total value of CZK 3 billion (EUR 112.2 million), is expected to be completed in July 2022.

The project consists of the track construction and rehabilitation, the redevelopment of the railway substructure and railway superstructure renewal, as well as the reconstruction of the selected bridge structures along the line which need to reach the required parameters. Six railway crossings on the section will undergo reconstruction, and their safety system will be modernised.

The platforms will be reconstructed to gain barrier-free access in the Dětmarovice and Petrovice u Karviné railway stations. In addition, they will receive new roofing and the necessary furnishing. A new information and orientation system will be implemented to serve the passengers. A modern signalling technology will be installed in the entire section including the stations. As part of the project, the traction line will be reconstructed taking into account the planned transition to a single AC power system.

The reconstruction of the Dětmarovice – Petrovice u K. – state border with Poland railway connection is has received EU co-financing under the CEF Blending call with up to 20% of eligible implementation costs and the EIB provided a loan of up to 50% of the total investment costs. The national funding is covered through the State Fund for Transport Infrastructure (SFDI).

The Czech-Poland railway line is a double-track electrified section situated on the transit railway corridor through the two countries.

This project is part of SZ programme to modernise the railway sections on the Czech Rail Transit Corridors I and II. In 2018, the railway infrastructure manager has announced the eight selected projects which are to be implemented under the funding from the Connecting Europe Facility and the European Investment Bank.