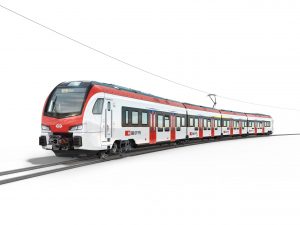 The tender held by the Swiss Federal Railways (SBB), Thurbo and RegionAlps includes three further options which would result in the delivery of 510 electric multiple units for regional transport.

Following Court’s rejection, the award of the contract to Stadler is confirmed. The court decision confirms that SBB complied with the requirements of procurement law and the equal treatment of bidders during the tendering procedure.

In October 2021, the three companies awarded Stadler a framework agreement for the manufacture and delivery of up to 510 single-decker Flirt multiple units.

In an initial call-off, the order of 286 Flirt EMUs with an order volume of around CHF 2 billion (EUR 1.93 billion) is planned. The framework agreement includes an option for up to 224 additional Flirt vehicles. Stadler says that further information on the trains will be released after the contract has been signed.

The legal proceedings initiated by Alstom have an impact on the delivery of the vehicles. The first trains will now not enter service until 2026 instead of December 2025 as originally planned. The new trains will gradually replace the existing train fleet until 2034. At SBB, the new trains will replace the first generation of Domino and Flirt trains, at Thurbo the articulated railcars and at RegionAlps, the  Domino and Nina trains.

The newly procured vehicles will help all three railway companies to implement their planned improvements to services as well as the service expansion projects planned by the Confederation and the Cantons.

According to the requirements, the single-decker multiple units will offer more storage space for bikes, pushchairs, and large items of luggage than the vehicles currently in use. They will also ensure good mobile phone coverage and data reception and will be equipped with power sockets in every compartment. The trains will meet the requirements of passengers with restricted mobility and will provide two spaces for wheelchair-users as well as a wheelchair-accessible toilet. Wheelchair spaces will be available in 1st class for the first time.

Thanks to better motorisation, the new multiple units will also make a significant contribution to improving punctuality.

The single-decker trains will be authorised to operate in Switzerland, Germany, and Austria.