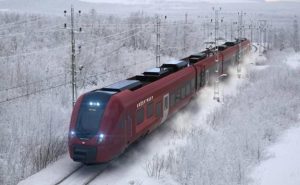 AB Transitio, the Swedish public transport company, awarded CAF a contract for the supply of regional trains, as part of the framework agreement signed in 2014. The base contract comprises the production of 20 four-car electric multiple units (EMUs) and 8 biodiesel-electric bimodal units (BMUs) consisting of 3 cars plus a power car. The first units are scheduled to be delivered by the end of 2023.

The contract provides for additional options that could increase the number of units by an additional 19 EMUs and 7 BMUs. The base contract amounts to more than EUR 250 million, a figure that would almost double should all the additional vehicle options included in the contract be executed.

The regional trains belong to the Civity Nordic platform, designed to operate in extreme weather conditions, from -40ºC to +40ºC. They are intended for operation in four regions of Sweden, specifically in Jönköping County, Kalmar County, Kronoberg and Blekinge. Initially, the new trains will run on the Krösatågen and Kustpilen lines, and for the latter an electrification project is under way, which is the reason underlying the decision to purchase bimodal BMUs.

The trains have been purchased for two main reasons. Firstly, to meet the growing need to extend transport services on these lines over the coming years, and secondly, to replace the EMU and DMU train fleet that is currently in service to improve both service quality and the environmental impact of public rail transport using biodiesel, which is a 100% renewable fuel.

Regional rail transport plays a key role in regional and inter-regional transport in Sweden, with this project creating new economic development opportunities in these regions, as well as contributing towards increasing their appeal as a destination.

In Sweden, as well in the Nordic countries, CAF is consolidating its position on rail market as in 2019 has acquired EuroMaint which won its first contract in Norway, in 2020.