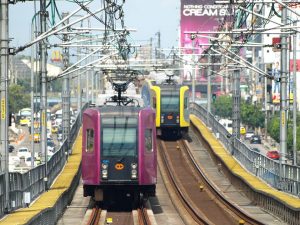 Sumitomo has indirectly acquired about 19.2% shares of Light Rail Manila Corporation (LRMC) which operates and maintains Manila LRT-1 line. The transaction has a value of PHP 3 billion (USD 59.48 million).

Through this investment, Sumitomo and LRMC, together with the other shareholders, will collaborate to provide safer and more convenient transport services to strengthen Metro Manila transport network. The participation also allows Sumitomo to improve the living environment and to reduce economic losses for commuting people in Metro Manila by mitigating traffic congestion.

The 20,7-km long LRT-1 line, served by 20 stations, crosses the city on north-south axis along Manila Bay in Metro Manila, between Roosevelt Station in Quezon City and Baclaran Station in Pasay City.

Light Rail Manila Corporation first joined the Philippines capital public transport market in 2015 securing a concession to operate, maintain and extend the Manila LRT-1 Line. since the concession agreement entered into force, the LRMC has rehabilitated and repaired the existing rail facilities and increased the frequency and quality of train service.

LRMC is currently extending the routes, enhancing interconnections with other transit routes, and developed a schedule of works to further expand its transportation capacity going forward.

For Sumitomo, the transaction is the first investment in the operation of a passenger railway business in Southeast Asia. The company has an extensive track record of receiving orders for multiple existing routes in Metro Manila, such as LRT-1, LRT-2, MRT-3, and is currently executing its rehabilitation and maintenance agreement for MRT-3 as well as a rolling stock delivery agreement for the North-South Commuter Railway.

In 2014, LRMC signed a 32-year concession agreement valuated at PHP 65 billion (USD 1.29 billion) for the operation and maintenance of Manila LRT-1 line.