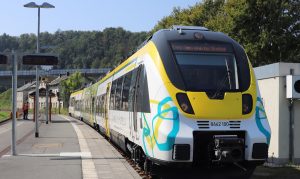 Alstom’s battery-electric train (BEMU) has successfully conducted a technical demonstration journey starting in Chemnitz, Germany, to Flöha and Zschopau and then back to Chemnitz.

During the journey, train’s drive was switched from catenary operation to battery power.

Since the start of the project, the accompanying scientific research at the Technical University of Berlin has been carried out by the Department of Railway Operations and Infrastructure together with the Department of Product Development Methods and Mechatronics.

The studies have revealed, for example, that a large proportion of the lines currently operated with diesel vehicles include non-electrified sections of well under 96.5 km (60 miles). The use of the existing catenary infrastructure allows battery-powered electric vehicles to be operated on these lines without major upgrades to the existing infrastructure. Extensive travel dynamics and energy simulations were also carried out as part of the project.

“Our studies have clearly shown that in local rail passenger transport, battery-powered electric vehicles have the potential to successfully replace diesel vehicles,” Professor Birgit Milius, Doctor of Engineering from the Department of Railway Operations and Infrastructure said.

The analysis considered different aspects of the battery-powered train, as well as the operation and infrastructure under various operating conditions.

The prototype of the battery-electric train was developed at Hennigsdorf, company’s site in Germany with the involvement of various project partners. These include DB Regio, the regional transport network for Baden-Württemberg, the German National Innovation Programme for Hydrogen and Fuel Cell Technology and the Technical University of Berlin. The German Federal Ministry of Transport and Digital Infrastructure is funding the project with a contribution of around EUR 4 million.

In February 2020, the transport company for central Saxony, VMS GmbH and Alstom signed a EUR 100 million contract for the supply of 11 three-car Coradia Continental battery-electric trains. To bridge the 80 km of non-electrified line between the cities of Chemnitz and Leipzig the authority requested a battery-electric (BEMU) fleet expected to enter service in 2023.