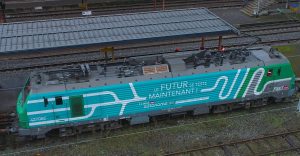 This trial, conducted on 29 October, marks a key stage of the Autonomous Train project.

Two years after the launch in 2018 of a consortium to develop the prototype of an autonomous train, a Prima BB 27000 locomotive ran in partial autonomy on the national rail network between Longwy and Longuyon, in eastern France, on a line equipped with the European signalling system ERTMS, under the supervision of a driver.

The consortium carried out all the steps that made the important trial possible, from the design to the description of the computer systems, cabling and software programming. As a result of this work, to which nearly a hundred people from all the partner companies contributed, the schedule announced in 2018 has been met and the ambition for 2020 achieved.

“This project is a major opportunity for Alstom to promote its skills and innovations in the field of rail automations and autonomous transport, thereby developing its leadership in new forms of autonomous and digital mobility,” said Jean-Baptiste Eyméoud, President of Alstom France, the technical leader of the project.

The next stage of the project will be the circulation, at the end of 2021, of a train with the same level of partial autonomy on a line equipped with lateral signalling (the signalling in force before the deployment of the ERTMS) without any modification to the infrastructure. This step will allow SNCF and its partners to manage all the possibilities of partially autonomous operation, regardless of the signalling system.

Meanwhile, engineering work is continuing to develop the various functions required for full autonomy, such as obstacle detection or environment monitoring. Twelve test sessions have been scheduled, which should enable the gradual addition of the functions required to increase the level of autonomy.

These stages will then take the consortium towards its final objective to run a prototype in complete autonomy in 2023.

The autonomous train brings real benefits as it increases the capacity, will offer greater fluidity and regularity and, thanks to reduced energy consumption and the shift from road to rail, is offers a more environmentally friendly transport.