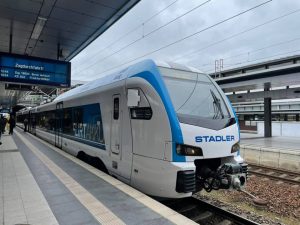 Stadler has successfully completed the battery technology research project to manufacture the Flirt Akku battery train. The project has been launched in 2018 and during the three-year research phase, Stadler focused on the development and testing battery technologies.

The technical feasibility of the battery technology in rail traffic and the limits of the installed battery capacity were explored on a specially designed test drives together with the manufacturer of the batteries, Initilion GmbH, for the pilot vehicle, to gain valuable experience for the design of future vehicles. The operational boundary conditions that transport companies have to take into account when switching from diesel to battery-electric traction, which is required and desired, were also examined.

When started the project, an initial range of 150 km was calculated, but following the tests, the range was corrected to up to 185 km on a line without overhead catenary.

“During our joint project work, we were able to gain valuable insights into the further development of battery technology. Since its presentation in autumn 2018, the vehicle, which is fully approved for passenger use, has covered 15,000 kilometers in pure battery operation. The project team placed particular emphasis on testing in the use of passengers possible scenarios such as catching up with unplanned delays on the route and use under extreme weather conditions to test the reaction of the batteries,” Evelyn Thiel, the technical director of the research project at Stadler said.

Since 2018, its German subsidiary Stadler Pankow has been doing research into a battery-driven engine, with funding from the German Federal Ministry for Eco-nomic Affairs and Energy. EUR 2.7 million is the estimated for the project. The project has been developed together with the Technical University of Berlin and EWE AG.

The zero-emission, energy-saving and quiet trains are expected to enter operation in 2022 on the North and East railway lines providing transport services at a speed of 160 km/h. The train has a capacity for 198 passengers, including 124 seats.

51 percent of the European rail network is electrified and in Germany is 60 percent electrified with plans to have a 70 percent electrified rail network by 2025. For the remaining non-electrified routes, the use of CO2-emission-free rail vehicles is a fundamental element in achieving the EU climate targets. In Northern Germany, which has plenty of wind power, a lot of diesel engines are in use on the railways because the non-electrified lines. The Flirt Akku battery train is powerful enough to move more than 100 tonnes unladen weight for a large part of the journey.

In 2019, Stadler has tested the Flirt Akku train during a heat wave at 40 degrees with full use of the air conditioning as well as in 2021 during double-digit minus degrees. “The use in pure battery operation was possible at any time without restriction, without us having reached the lower limit of the capacity,” Evelyn Thiel explained.