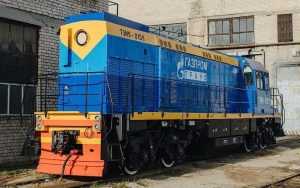 Sinara Transport Machines (STM) and Gazpromtrans signed a contract for the supply of two diesel locomotives of TEM9 and TEM14 series expected to be delivered by the end of this year.

The TEM9 locomotive has been delivered to the customer already on October 26 while, according to the second contract provisions, the TEM14 shunting locomotive will be transferred to the operating organisation in November 2021.

The production of the diesel locomotives is carried out by the Lyudinovsky Diesel Locomotive Plant (LTZ), part of STM Holding.

“We continue to develop and extend our strategic cooperation with the leader of oil and gas industry. Our machines help the enterprises of Gazpromtrans to reach their production aims in various regions of the country,” Anton Zubikhin, CEO of STM Trading House said.

In 2021, Gazpromtrans has ordered a powerful two-diesel TEM14 shunting locomotive.

The two companies consider the transition to comprehensive long-term contracts for the supply of locomotives, spare parts and after-sales support. Currently, Gazpromtrans already has a number of machines produced by STM in their locomotive fleet which includes 38 units of TEM7 and TEM7A diesel locomotives and 10 vehicles of TEM9 diesel locomotives.

TEM9 is an 882 kW (1 200 h.p.) diesel locomotive with electric transmission and independent wheelset drive, designed for shunting operations on the 1520 mm gauge rail network. Its competitive advantage is the minimal turning radius (50 meters).

TEM14, a two-diesel single-section locomotive with the capacity of 1 764 kW (2 400 h.p.), is used for heavy shunting work on railways and at industrial enterprises. Due to the two-diesel concept, the locomotive has the maximum power for this class of diesel locomotives. The intelligent control system of the two-diesel installation allows one to use only one engine at low traction load and automatically start the second diesel engine when the load increases.