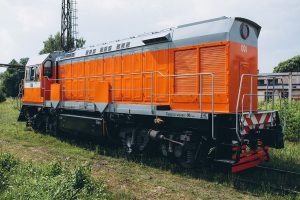 STM Trading House, part of Sinara Transport Machines, won a contract for the manufacture and supply of six TGM8 Elephant diesel locomotives to Compagnie des Bauxites de Kindia (CBK), a subsidiary of RUSAL specialised on extraction and export of bauxites in Guinea. The TGM8 vehicles will be used in the production chain of the West African asset of the Russian aluminum company.

The new four-axle locomotives will be delivered before the end of this year. They are designed

with hydraulic transmission to perform shunting operations on 1435 mm gauge railway tracks. The power of the locomotive is 882 kW (1,200 hp) and it is perfectly fit for operation in tropical climate with pronounced alternation of dry and wet seasons. This provision is especially important given the climatic conditions in the Republic of Guinea, where the operating company is located.

The Elephant diesel locomotives for CBK are equipped with an innovative multiple unit operation system (MUO), a method of operating the rolling stock in such a way when several locomotives or motor cars are coupled into one train, and traction motors are controlled from one station. This technology has a number of advantages, which include an increased maximum acceleration, no need to re-couple the locomotive, lower axle load, and increased reliability, which is achieved due to the ability to continue moving even if one or more cars fail.

The TGM8 is a locomotive is manufactured at the Lyudinovo diesel locomotive plant, in Kaluga Region, that is producing shunting, clean-up and mainline diesel locomotives for industrial companies in Russia and countries using the 1520 mm gauge.

The first diesel locomotive of this series was built in 1972 by order of the French company Solmer. Since then, TGM8 has been repeatedly upgraded and received several updated modifications. STM delivered this type of locomotives to China, Vietnam and Pakistan.

“TGM8 is one of our locomotives targeted at foreign customers. The locomotive has repeatedly proved its functionality and shows excellent performance parameters,” Anton Zubikhin, the CEO of STM Trading House said.