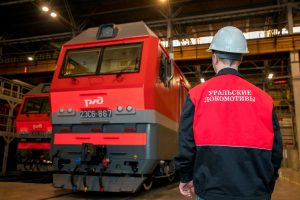 Ural Locomotives has been manufacturing the Lastochka high-speed electric trains since 2014 and they are currently transporting the passengers on 58 routs in 35 regions of the Russian Federation.

“The agreement on the development and localisation of high – speed trains, signed by STM jointly with the Russian Railways and Siemens at the end of 2020, provides for the construction of modern rolling stock for high-speed mainlines at the production facilities of this enterprise [Ural Locomotives]. Thus, making Ural Locomotives as the center of STM Holding’s mainline locomotive construction site is the most logical choice. We strongly believe in the enormous potential of machines with asynchronous traction drives and have already started the work on their production,” Viktor Lesh, the General Director of STM said.

The locomotive was developed by the STM Holding’s own engineering services. The team of the STM Research Center is responsible for the technical solutions of the 2TE35A diesel locomotive. Such essential engines’ components as control systems and traction asynchronous electric drive will be produced by the Traction Components company, which is also a part of the Holding.

In November 2020, STM and Russian Railways signed an agreement for the supply of 2ES6A and 2TE35A locomotives in the framework of the Transport of Russia 2020 Forum.

For a mechanical engineering holding, this marks an entry into the mainline locomotive manufacturing market.

Russian Railways will receive the modern work equipment that guarantees the possibility of transporting goods with a total weight of up to 6 thousand and 9 thousand tonnes, respectively, on all sections of the Russian railway network, including the Eastern areas and non–electrified sections of the Baikal–Amur Mainline. In addition, the 2TE35A mainline diesel locomotives also have a great potential for operation on other railways’ areas, such as the Northern Latitudinal Railway.