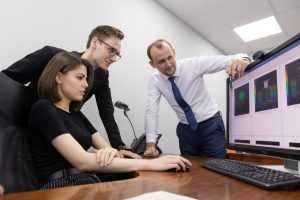 The R&D Center of Sinara Transport Machines (CIC STM) and the IT-company Lanit will work on a pilot project for the implementation of a uniform platform for creating digital twins for the design and production of high-speed rolling stock and urban transport.

For the project, which started in July 2021, the Skolkovo Foundation acts as a support measure operator.

“Our project with STM is a vivid example of new world-class digital production technologies’ application in Russian mechanical engineering. The support provided by Skolkovo is aimed at stimulating the demand for domestic digital solutions, so that such ambitious projects are based on the products of Russian developers,” Kirill Kayem, the Senior Vice President for Innovation, Skolkovo Foundation said.

The project will result in the first domestic software in the Russian railway engineering sector which is implemented in the field of end-to-end engineering technology. The novelty of the solution consists in the design and technological documentation that are fully digitalised with the use of annotated 3D PMI model. Such IT solution will cover all stages, from design to starting the production process. End-to-end technologies will significantly speed up the output of the finished product and expand the capabilities of enterprises which will improve the efficiency of production process and cost management.

“End-to-end design technologies are the next logical step in the STM Holding’s digital transformation which naturally began with the processes of product inception. We are significantly accelerating our internal processes, substantially improving the quality of design and technological solutions and shortening the development and launching time for new types of equipment such as high-speed rolling stock, freight and shunting diesel locomotives, track machines and urban transport,” Viktor Lesh, the CEO of STM said.

The first site for pilot software will be produced at Lyudinovo Diesel Locomotive Plant, where this technology will be used to develop a digital twin of a high-speed platform bogie for container transport (SPPK, design speed up to 140 km/h). In the future, the solution will be implemented at all of STM’s enterprises.

“The STM project involves a fundamental digital transformation of design processes, which will allow the holding to respond more quickly to market challenges and reduce the costs of launching new products,” Alexander Romanov, Director of Mechanical Engineering Digital Transformation Department of Lanit said.

At the end of 2020, Sinara Group, Ural Locomotives and Siemens started the construction of the first domestic manufacturing plant for high-speed trains.