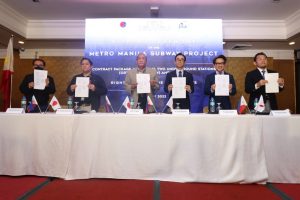 The contract package 104 (CP104) also involves tunneling works and the construction of two underground stations – the Ortigas and Shaw stations.

The contract was signed on May 5, 2022, at Edsa Shangri-La in Mandaluyong City, situated 8 km east of Manila centre by the DOTr Secretary and the representatives of the joint venture. The Japanese Ambassador to the Philippines Kazuhiko Koshikawa and representatives of ​​Japan International Cooperation Agency (JICA) also attended the ceremony.

In February, Philippines Government and JICA signed a USD 2.2 billion loan agreement for the construction of the first phase of the underground metro system. To date the Japanese agency provided a first tranche of JPY 104 billion (USD 797 million) and a second JPY 253 billion (USD 1.9 billion) tranche.

At the event, right-of-way usage agreements were also signed between DoTr and companies from private sector including Robinsons Land Corporation, Ortigas & Company Limited Partnership, Blemp Commercials of the Philippines, Megaworld Corporation. This agreement will support DOTr to speed up the construction of the project.

The contract for the construction of this Metro Manila Subway section is part of the first phase of the project (the central section) covering the construction of a 35 km long underground line with 15 stations. The north-south line will run from Quirino Highway in Quezon City, FTI, Taguig City, and the Ninoy Aquino International Airport Terminal 3 (in the south). In Valenzuela City a depot will be constructed to serve the trains which will operate the line.

The construction of Manila underground metro was launched in February 2019 and major works begun in December 2019. At the beginning of 2022, Mitsubishi Corporation and DOTr signed a USD 1.2 billion contract for integrated railway systems and track work. In February 2022, Mitsubishi awarded a consortium of Colas Rail (leader), Thales and Egis a EUR 1 billion contract to build the turnkey rail system.